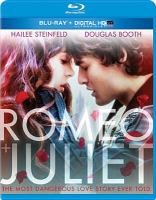 This my favorite dvd version of Romeo & Juliet!! It shows the catacombs & makes more sense to me how Juliet would “die” & Romeo would go to be with her & kill himself & then she awakes to find him.

A beautiful, though abbreviated portrayal of the timeless Shakespeare play. Wonder how many versions of this have been staged and on screen -- thousands, probably. Like the 1968 film, the main actors here are teenagers, which is more accurate -- Juliet, is 14 in the play -- than the usual repertory staging with older actors. Given the petty warfare and personal feuds of Late-Medieval/Renaissance Tuscany, life moved fast and could be over just as fast. Particular shout-out to Hailee Steinfeld's Juliet, whose youthful sweetness co-exists with a necessary resoluteness.

This is one of the greater R&J adaptations I've seen, honestly. The cast was great, costumes and setting beautiful. It was all around a wonderful movie. It really felt like Shakespeare to me

The costumes and settings were amazing! The modification of the play - no thumb biting scene, but there was a brawl all the same - and the end - Juliet awakes before Romeo dies, are relatively small and nothing to complain about; the real complaint is from the diminution of the Queen Mab speech. All of the performances were excellent from all of the non-title characters, and that is where it all goes awry: the man playing Romeo has a photogenic countenance, and Juliet is by contrast downright homely (and too old for the part). Neither of them act well, primarily because of their poor voice control. It ruins the whole film.

This was my first time watching a Romeo and Juliet movie. I was pretty disappointed.
I liked the costumes,the setting and the visuals. However the acting was pretty bad with a few exceptions. I didn't like Hailee Steinfeld's portrayal (Juliet) at all, I felt like at times, I couldn't even hear what she was saying!

Throughout the whole movie, I kept thinking at how young Juliet was,(I know she was 13 in the original play, but seriously I would have wanted her be older in this adaptation!).

I also felt that 'the epic and searing tale of love' wasn't really captured on screen. The whole interaction between Romeo and Juliet didn't indicate to me that they were in love. I mean if a movie is going to convince me that falling in love in one evening is at least faintly plausible, then put some more passion and realism into it.

I don't recommend this movie at all. However I have seen a lot of comments about the 1968 version. So I might have to give that one a go.

While this movie was visually appealing, the acting was awful. The actors mumbled their lines and there was no real romantic passion between Romeo and Juliet. With the exception of Damian Lewis as Lord Capulet the performances lacked any fire or passion. See instead.Franco Zeffirelli's 1968 Romeo and Juliet version.

The editing and modifications to the script (and even plot) were annoying. Nowhere near the spark and life of the Zefferelli version.

ok, this was awful. I can't even begin to describe how bad it was. I mean the costumes were good. but here I will give you a list of why I hate this:
-cheesy lines
-they rhyme almost every single time they speak
- Juliet was not pretty at all. romeo was cute, but had too many delicate features in his face
- unnecessary sword fights

Beautiful costumes, some good actors sprinkled in, and gorgeous setting (shot in the streets and beautifully-made old buildings of real-life Verona). Abridged to make it more accessible, & the actors all seemed to understand the lines they spoke, which is absolutely crucial to pull off a Shakespeare performance. The story, though, is as dumb as ever--Shakespeare writes some beautiful lines, many of which are in this play, and I love him, but the plot of this play has always annoyed the heck out of me, and this rendition didn't give me anything new to distract from the core dumb decisions. Like the meme says, this is not a love story, it's a 3-day relationship between a 13-year-old and a 17-year-old that causes the deaths of 6 people. This movie still felt more like an unfortunate teen-aged infatuation than a love story. Watch for the costumes and the setting, though!

I was very impressed with this adaptation. The actors are all great, the locations are wonderful, and pacing is quick. I don't know why this movie didn't get better reviews. The leads, Booth & Steinfeld, are very good as Romeo and Juliet. In her NY Times review, Manohla Dargis stated that Steinfeld was miscast. After seeing the movie, though, I disagree. Perhaps Steinfeld wasn't the best to play Juliet, but I felt that she was very good and had an excellent grasp of the Shakespearean language (in contrast to most American actors). This adaptation is also great for all ages as well. You can introduce kids (ages 11 and up) to Shakespeare through this movie, since there are no R rated elements in this adaptation. I also loved the actor who portrayed Benvolio. He was so young, and yet so marvelous in the role! His grasp of the Shakespearean dialogue was splendid. All of the other actors, including Damian Lewis & Paul Giamatti, are fantastic. My only major complaint is that the highly emotional, yet good, score, got in the way in pivotal scenes. In any case, give this movie a chance. Highly recommended.

This adaptation of William Shakespeare's Romeo and Juliet was excellent. What made it really special was the fact that it was filmed in Verona, and adapted by Julian Fellowes of Downton Abbey fame.