Saved Searches Advanced Search
ALL Austin Public Library locations, the Austin History Center and Recycled Reads are closed to the public.
Holds and due dates on books and materials will be extended during the closure period. See here for more information.
Print 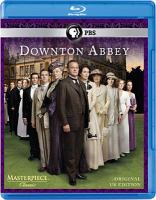 All seven episodes from the first series of the Edwardian costume drama following the lives and loves of those above and below stairs in a stately home prior to the outbreak of WWI. The Grantham family, long time custodians of Downton Abbey, face a crisis when the heir to the estate dies on the 'Titanic'. With his three daughters unable to inherit by law, Robert Crawley (Hugh Bonneville), the current Earl of Grantham, must try and marry his eldest daughter off in order to obtain an heir. Meanwhile, the family's determination to cling to class and rank is mirrored in a number of growing rivalries between the servants which threaten to undermine the smooth running of the house. A stunning and colorful drama set around the aristocratic Crawley family and the staff which serves them. Set between 1912 and 1914, Downton Abbey chronicles the conflict of class, gender, and politics, and serves it up with a refreshing dollop of sizzle and scandal.
Publisher: [United States] :, Distributed by PBS Distribution,, [2011]
Edition: Original UK edition.
Copyright Date: ©2011
ISBN: 9781608834259
1608834255

It is all that earlier reviewers commented on. However, watching too many segments in too rapid succession gives some of the developments a frenetic cast, especially to the episodes on the second disc. On the one-upmanship side of the scoreboard the letter that sister Edith wrote to the ambassador in London exposing Mary's dalliance would not have been addressed to His Excellency at the Turkish Embassy. There was no such thing at that time -- it should have been addressed to the Ambassador of the Ottoman Empire. And someone in Edith's position/station would have, should have, known that.

Downton Abbey is the perfect show for anyone who loves history, drama, and intrigue. The stories explored in the show are interesting, and the acting is incredible. For those who think the show looks boring, I can assure you it is actually the opposite!

I had been avoiding this show because I thought I wouldn't like it. I was very wrong. At first, I was still thinking, "I don't like this. I'll watch this episode to give it a fair chance and then return it."
Let me reiterate: I was very wrong. I am hooked!! I love the dry wit and humor that British shows are known for, and I love the drama. Yes. My only complaint is how many characters there are and how tricky it can be to keep track of who wronged who and for what reason, but it's not too bad.
I already have a hold on season 2 and 3! :)

I am intrigued by this show, and I have found that storyline is [exqui]site. The realtionships have great character, and they can be read to coprehension of substance.

Such a great show. I'm addicted.

I had heard so much about Downton Abbey, I finally gave in. Just finished season one. It seemed a bit slow, but it drew me in, although there is a lot of back stabbing and pettiness amid the period costumes and scenery. I just put a hold on season two.

This is a period piece brittish drama. It is well acted and well written. The settings and costumes are spot on. This really isn't my kind of show, but I watched and enjoyed it. I plan to watch the rest of the series, but mostly because my girlfriend loved it rather than my own interest. It is a very well done show, just not my cup of tea (pun intended).

So many people recommended this series that I watched the recent (3rd) season and really liked it.

I've not read much history so all of this is totally new to me and that is what makes it so interesting.

DA is a fascinating world to visit. The ways of the aristocracy and lives and interaction with their servants is interesting.

The series is very well written, the many characters are complex and appealing.

The castle and grounds are beautiful and look especially amazing in HD.

Carson to Thomas: You have been twisted by nature into something foul, and even I can see that you did not ask for it.

Carson [to Thomas]: "I do not wish to take a tour of your revolting world."

Even a butler has his favorites

Violet Crawley, Dowager Countess of Grantham: "What is a "week-end"...?"

Violet Crawley, Dowager Countess of Grantham: "...I have PLENTY of friends I don't like..."

Violet Crawley, Dowager Countess of Grantham: "First electricity, now telephones... Sometimes I feel as if I were living in a - an H. G. Wells novel..."

This series is very well written which I strongly recommend to view! From the very beginning it captures the essence of the characters during a time in British history where living in Downton mansion meant a lifestyle of being well-to-do by the standards of the rich&wealthy to have servants,maids,footmen,butlers& the sort were a way of life past on from generation-to-generation,so as we are captivated by the elegance of the family while the less forunate are striving to please the aristocrats! This season1 series is not to be missed with all the hidden secrets bet. family members& servants alike...

Stories of royal people and their servants

mysccl thinks this title is suitable for 18 years and over

Other: The make up and the ambiance are apt for the story