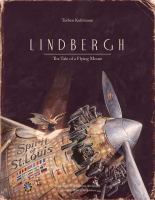 The Tale of A Flying Mouse

Fantastic book for 4-8 year old kids. The illustrations are gorgeous, and story is giving a kid and understanding of how the whole flying idea evolved to creation of the planes. Well written, engaging and, again, the illustrations is a true artwork.

We owe a Moletown of this author ( which is a story told in pictures, and it's worth buying for illustrations alone)

The old world has become too dangerous a place for a mouse with all its traps, owls, and cats. So, like the humans, they immigrated to the new world, only, one was left behind. Feeling lonely and afraid, this little creature sets out to cross the vast ocean to join his brethren. By using the bats as inspiration, he sets out to create an airplane. After going through many designs, and failed test flights, he finally builds one that works, narrowly escaping the claws of his enemies. Every image is lovingly drawn in a realistic fashion. The mouse is incredibly cute, and clear thought was put into how he could physically accomplish these tasks. This tale of a flying mouse uses the historical figure of Lindbergh as a basis. In this way it is part realism and part fantasy. Before his famous flight, Lindbergh was an unknown pilot, so the author chose the most underdog of creatures to likewise achieve the impossible. While there is little "fact" in the story, the back does include some biographical data on early flight. Like the original Lindbergh tale, little Lindbergh's story is inspirational. Both the text and illustrations overflow with the heroism of this determined, intelligent mouse, and you can't help but root for him every step of the way.

Lindbergh: The Tale of a Flying Mouse has remarkably little to do with Charles Lindbergh and everything to do with airborne Rodentia. Shockingly beautiful without jading the reader in the process, German author/illustrator Torben Kuhlmann goes in for something 100% original and comes out a star. If this little critter isn’t on your radar yet then you’re looking in the wrong direction.

Olenka0211 thinks this title is suitable for 4 years and over

There was a time when the mice of Germany flourished. The human world was perfect to their needs. Then one day, an inquisitive little mouse (who liked reading the occasional human book on occasion) found that all his fellow rodents had disappeared. Mousetraps had increased tenfold, so he reasoned that perhaps his fellow mice had traveled across the sea to America. Determined to find them he found instead that at the docks there were cats absolutely everywhere. A quick escape revealed the presence of bats to him. Or, as he liked to think of them, mice with wings. Inspired by their appearance the mouse set about discovering the secrets of flight itself. Early experiments met with failure but he was determined to hit on the right solution. It was only when he got close to success that he attracted the attention of the owl population. Now to escape to the sky the mouse must outwit a pack of various animal foes, as well as the nature of gravity itself.