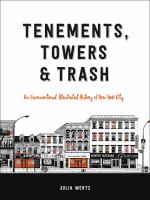 Julia Wertz is not a native New Yorker which is part of what made this book so unique. Her perspective was void of an inherited cultural awareness which left the reader with her pure zest for the city as it is.

Amazing! Spending a few month in NYC, this was a great treasure trove of awesome information.

What a splendid journey! The coffee-table-sized graphic novel takes us on an insider's vision of New York City: then-and-now drawings side by side of street corners throughout the Five Boroughs, histories of bars and bookstores and doorways and bakeries, vignettes covering arson and subway development and real estate scams. Should appeal whether you are a native, or a visitor, or even would like to be a visitor.

This is a fun and quirky graphic novel homage to New York City. The lovely comparison drawings of how different neighborhood streets have changed through the years are peppered in among intriguing vignettes and collections highlighting small, lesser known histories of the city.

Quite a hefty tome, Tenements, Towers, and Trash: An Unconventional Illustrated History of New York City is Julia Wertz’s exhaustive and fascinating tribute to the great, vibrant metropolis that is New York, now and throughout time. Completely packed with information and details, I think readers could really get absorbed in Wertz’s engaging, snarky, and informal writing, her learned opinions, and her intricate, meticulous recreations of city street scenes.

Living in the city for a decade, it is easy to see Wertz’ passion and love of the place and its stories, and while she writes it is “not a useful guide to New York City,” for someone who has not yet spent more than a few hours in New York, the book really sparked an interest to visit and explore some of the places mentioned. Every page offered new cool facts, insights, and oddities; in addition to the promised tenements, towers, and trash. I learned more about some things I had heard of before, like the Kim’s Video saga, and a lot of things totally new, such as Madame Restell, New York’s infamous nineteenth century “abortionist,” and the little known role she had in women’s history in the city. Surprisingly, one of the most interesting segments for me was Wertz’s discussion of real estate in New York, in all its complexities and over the top housing opportunities. I had no idea of the difficulties, aside from the cost, of finding housing in New York, and as my wife and I are currently stressing out searching for real estate in the Twin Cities, it resonates.

Wertz illustrates loving depictions of her favorite indie book stores, bakeries, even pharmacies, and, of course, pizza joints. Throughout the account, Wertz really demonstrates an eye for architecture, and the details in the drawings are just amazing, with the streetlevel scenes that you can keep exploring and discover new things on another look, little things like a “lighting library” on Bowery. What could that be? The story of the city as shown by the streetscene, architecture and storefront signage that survives and changes. As we read on, pouring over her depictions of intersections in the 1930s or 1970s contrasted with a scene from the 2010s, we watch the disappearance of ornate cigar stores in place of chain restaurants and dollar stores, the tendency for old theaters to become churches.

One of my favorite sections was near the end, a series of streetscapes taken from one of Wertz’s long walks through the boroughs of the city, Brooklyn, Manhattan, Queens. I could really feel the energy of the many neighborhoods that make them up through the artwork, and was a great conclusion to the book. From someone who also relishes walking long distances in my own cities, from Downtown to Uptown or from Summit Hill to Lowertown, observing the passing architecture and scenery, I really appreciated the chance to do the same in another city.

mammothhawk229e thinks this title is suitable for 18 years and over