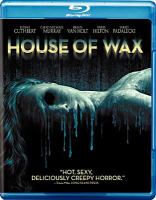 NO ONE WILL BE SEATED DURING THE LAST 10 MINUTES OF NIGHT VISON...
and THIS FILM BROUGHT TO YOU BY CREW CAR WASH & AAA
Competent cast, enough of a Shyamalan to the story to make a fresh go of it...
I can see them trying to survive some homocidal rampage with a soundtrack
straight out of drive time, but loses the supportive factor there; the sting's
awol until the final act.
But the problem with a reboot is when you stay true to the original, and when
you strike out new... ONE of the cast; having had some prior film work; given a
signature to their screen time that all but recreates that... I can't imagine
anyone watching this and not waiting for the big kill of Hilton to see it come with
the slap-in-the-face delivery of a spear in the face to die on her knees while the
killer films her last seconds debating the "that's-enough-of-this-tripe" eject
Anyone reading this know if there is some immersive intent with full screen
over widescreen, or that was too much competition for formentioned Hilton's skills?
Jack Bauer's daughter will survive, her bad-boy brother a little too close at the
end I thought, and those Supernatural fan-fic followers can enjoy the scene where the one
brother's prepped for immortality with the hot wax coating... Of course you're gonna
die there, it's the backhills somewhere, or, as said in "Deliverance"...
"WHERE YOU GOIN' CITY BOY?"

Over the years, I've seen lots of horror movies. Some are outstanding, some are terrible, most fall into that great big bell curve middle, and that's the case with House of Wax: An okay or average-y horror film from 2005. Had a Wrong Turn or Joy Ride vibe, with it's road trip gone wrong, and somewhat noteworthy for an appearance by socialite Paris Hilton (when I saw this the first time around in the theater, there were a few cheers and "Die Paris Die!" comments). The wax town is particularly creepy.

This movie was terrible. Dumb, Boring and Stupid Waste of time - Waste of Electrical power.
It would be a waste of money to buy. On watchable best describes this movie. I fast forwarded all the way.

If nothing else, House Of Wax certainly did manage to reinforce my perspective on the demented reality of America's on-going love affair with its out-of-control, over-the-top, movie psycho-killers.

With House Of Wax being a 2 hour affair, it took pretty close to half that time for this predictable, little picture to get to any of the worthwhile horror-stuff.

Prior to that point it was all just the usual cliched nonsense where we meet the chosen group of young adults (selected for the up-coming slaughter) and have to endure listening to the bullshit of their tiresome personal dramas, such as unwanted pregnancy and the dealings with one's "bad-boy" brother.

Set during a full moon (natch), House Of Wax was a painfully predictable "seen-it-all-before" horror story.

This one's story was so preposterous (where the psycho-killers had been getting away with their deranged doings for years and years) that all one could do was roll their eyes to the ceiling (over the sheer inanity of it all) and just hope to hell that a sequel wasn't somewhere in the making.

it waz gud cuz chad waz in it n i saw pariz hilton get kill'd off,lololol,hahaha....

This movie was way better than I thought it was going to be. worth checking out if you enjoy b horror movies.

“I don’t know who smells worse. Him or the pig sh#t that’s in this bottle.”
The High Plaines Drifter

Nick Jones: Ugh, Dalton, did you crap your pants again?
Dalton Chapman: What? No! I don't know, maybe. I am wearing my work clothes

Carly Jones: [Carly hears a noise outside the tent] Wade, wake up. Wade! I heard something.
Wade: Yeah, it's probably the serial killers or something.

bdls206 thinks this title is suitable for 17 years and over

Six friends are stranded in a ghost town where a towering wax museum looms ahead. And inside are two brothers who have a special way of making the wax figures look real...