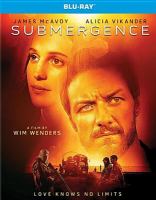 Don't waste your time. Much as I wanted to like this film due to the presence of Alicia Vikander, this gloomy romance inadequately portrays the scientific world inhabited by her character (despite the potentially interesting deep-sea hardware shown). Worse, the movie clumsily and uncomfortably relates James McAvoy's parallel story as a prisoner of jihadist terrorists. Sure, we understand that both characters are submersing physically and psychologically, but the audience isn't left any better informed, emotionally or intellectually, by the end.

Completely pointless movie...a waste of time. A brief fling then he went off to his mission that didn't make sense (till the very end) and she left for an important scientific mission half assed (because the other half left with him). Story and scenes stitched together incohesively; very hard to follow.

there is no ending: let that be a warning to those who....
the love is not convincing. i actually disliked the guy. and the grrrl is blah.
so what. they are so far apart it is a considerable stretch to think they wil ever meet again.
esp. since she is stranded 1,000 yards below the icy sea...that is curtains.
and he is swimming to Goa....from Kenya....after nearly getting blown up by US choppers.
he should've...
it is pretty. except for the people. and the story just stops.
nada.

Unconvincing love story and uninspiring war on terrorism but decent science lessons on ocean life (see "Quotes") and breathtaking film locations of the Faroe Islands, German Atlantikwall Bunker near Varengeville at Normandy (fallen by erosion of the cliffs) and Djibouti.

Slow moving. Sound editing needs work. A lot of time the background music and sounds are so loud that you can't understand the dialogue.

This movie is about a man named James who is rotting away in an African cell while the love of his life, Danielle, is getting ready to head out towards the Arctic Sea. I found this movie to have a very confusing storyline that didn’t seem to know where it was going. Typically Wim Wenders films are well done and entertaining, but this one definitely fell flat. This drama/thriller film was more of a romance movie as it told the story of two people from completely separate worlds, but nothing really flowed together well. I would rate this movie 2.5/5 stars. @The_Reviewer of the Hamilton Public Library Teen Review Board

If you're looking for a long drawn out movie with a bad ending, look no further.

Wim Wenders skillfully directs this unusual tale of love and loss. Strong acting by Vikander and McAvoy drives this drama, but patience for the story to unfold is required. After meeting and falling for each other, the two protagonists go their separate ways . Their subsequent experiences are told in parallel, one journeys to the the ocean floor and another into harm's way in East Africa. We are submerged into their disparate lives, through beautiful visuals and fine writing, and we are driven to ask, will they be reunited.

We will take our place among the teeming hordes. We will be the foundation
for all forms. We will be in Hades, drowned in oblivion, swallowing water, erasing all memory. It will be a submergence.
===
I've thought about bodies buried at sea. It's not dust to dust, that's for sure. It's water to water. We are all being made of water.
===
Do you know Bambi, water boy?
-I saw it when I was young.
You see, Bambi is the innocent one. When you watch the forest fire again, then you will see his father protecting him, giving up his own life. It is like the Crusaders who are burning the Islamic state.

So, what's your favorite water body, since you asked me?
-The human body. It's my favorite body, It's mainly water.
===
Is it true that there's oxygen stored in the micro life at the bottom of the ocean, and that one day it's going to run out?
-We shouldn't run out... if we take the right steps. I mean, we are entering an age where everything will be quantified. What we see as abundant, will be limited. So, oxygen will be like water and minerals and fuels.
===
What would happen? If the submersible would crack?
-Mm-hmm. Water would come in and my lungs would seal off, and I would die a dry drowning by acidosis and hypoxia.

The ocean has five layers.
- Five.
...
I want you to picture this.
- Okay.
Yes, it has five layers and the first one is epipelagic. It contains all the plant life and coral reefs. Whatever memory you have of baptism, or any other form of submersion, is there in the blue water. The next layer, is mesopelagic. This is the twilight zone... into which... blue and all other colors and light vanish.
Everything under the mesopelagic is night. If you were with me in a submersible, that's like a deep-sea submarine...
-Is it yellow?
Of course it is.
...

If you were with me in one of those, you would have spent two hours at least,
in the blackness you're in now, to get down to... You can open your eyes. The hadopelagic, which is what interests me. Hadal from the Greek "Hades", meaning unseen.
-Doesn't it mean hell?
To some. This is the other world in our world. It's just miles and miles of blackness? No one knows much about the mantle. They think it has no life, and therefore no possibility of reanimation, and is so without scientific interest. I disagree. It needs to be explored. ... I collect samples, from what I think is... the living bit of the mantle. The first few kilometers underlying the Hadal deep. I believe that all life and... regeneration in our world belongs to it.
We refuse to value what's down there because it's dark.

I'm a bio-mathematician. It's the working of the science to whatever is in the sea.
===
Did you think about your own death a lot?
-I did, and I do.
I've heard people telling me that they've had those exact same thoughts when they fell in love.
-No, you don't die when you fall in love.
===
I am a doctor.
- Who keeps company with killers.
===
I know all about self-sabotage. I'm the expert on it. I want you to tell me now that this is not you doubting yourself.
- This is not what this is. It's not doubt.
'Cause it deserves the cover (of the science journal "Nature"), not just to be published. Searching for life that may share the same way of life, that we may eventually find in water on Mars? Possibly proving that a billion years ago, the same ecosystems existed here and there? You've touched the limits of life. You've touched it. And now we have to wrap our whole hands around it, and bring it to the world... and finish this.

Some of the most common pathways of energy production in microorganisms, who live along the hydrothermal vents, are oxidation or reduction of sulfur compounds. The most common electron donor along the vents is hydrogen sulfide, making oxidation of sulfur-containing compounds the base of the food web in this environment. The microorganisms capable of oxidizing or reducing sulfur compounds show amazing diversity. Over 161 gram-negative sulfur-oxidizing bacteria species have been found to inhabit the hydrothermal vents. Bacteria in this environment are often thought of as all being autotrophs, but of these 161 species, over 97% are also capable of heterotrophic growth. In addition, 37% perform fermentation. Furthermore, the sulfate reducers known to be present, include at least nine different genera, including gram-negative...

Pretty slow moving. And myself not caring what happened anymore.