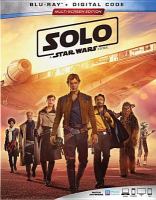 Not bad at all, though it’s not my kind of movie to watch. Good cinematography, good plot, good performances.

Solo a star wars story was my 1 star wars movie it was so cool. I liked Han Solo. My favorite scene is when young Han Solo flies the falcon and when he asks cheiwe his age.

I delayed watching this film because so many people said it was awful. But I really liked it.
The sets and special effects are great, the acting is well done, the casting is good, and the story is interesting.
It offers a pretty believable backstory of how a teenaged-ish orphan became Han Solo. A lot of people seem to only see the casual, superficial smuggler who is older Han Solo, but not so far beneath that surface is a lonely man who was hurt badly, deeply, and finds it hard to trust others... which is touched on in this film.
Young Han isn't old Han, and shouldn't be expected to be: Alden Ehrenreich as young Han is trying to find his footing as a young man, and begins his journey to become the older Harrison Ford Han we got to know and love (or at least like).
The twists and turns in this film are well done, the pace is good, and there are some lighter moments (but not LOL moments) that are worth waiting for.
Han, played to perfection by Alden Ehrenreich, has to steal to feed himself on the rough streets of an over-industrialised planet. He dreams of a better life. A life as a pilot. With the love of his life, Qira, at his side. Soon, he and Qira are about to escape, but things start to go wrong. Fast. They're being chased, and...
How do they escape? At what cost? How does Han meet Chewbacca? Does Han end up working for the Rebels or for the Empire? What happens to Qira? Does Han really win the Millennium Falcon in a card game? Can Han speak Wookie? Is Lando a little too fond of his android? Is Han really a great pilot? You'll have to watch this film to find out!

Quite possibly the worst Star Wars film ever made.

Firstly, the original directors (21 Jump Street) given the green light for this project were unceremoniously canned mid-production and replaced by Ron Howard because the producers didn't like the zany campy raunchy politically incorrect intergalactic road trip movie they were making which I believe would have been a much more entertaining vehicle befitting the actual character of Hans Solo.

Secondly, the actor who was poorly cast as the lead character was so stiff, humorless, anonymous and completely lacking in charisma and star quality that the film was basically doomed from the start. At best this actor should be playing minor characters on screen like the son of a blacksmith in Game of Thrones.

Overall, a middling movie. You would be better off watching CGI Star Wars series like The Clone Wars or Star Wars Rebels which have far superior storylines and character development. Thanks.

Entertaining, especially, for the fans.
Who doesn't like Chewbacca!

This started off at a good pace with an interesting storyline and then fell into franchise predictability and mediocrity. Oh well, at least there were great sets and Ron Howard's direction was spot on.

Frightening or Intense Scenes: Like all Star Wars movies, this has some violence that will scare some young children.

Violence: Some violence. Nothing outrageously disturbing, but it puts the WAR in Star Wars.

Coarse Language: Multiple uses of hell, d--n, one of two cr-ps. One unfinished use of the word sh-t.

Coarse Language: A lot more curse words in this movie than any other star wars movie

Coarse Language: Language used throughout the film. More than usual for a Star Wars movie.

white_swan_438 thinks this title is suitable for 14 years and over

aiya321 thinks this title is suitable for All Ages

Spiderson thinks this title is suitable for 10 years and over

black_panther_2914 thinks this title is suitable for 9 years and over

TheUltimateReviewer thinks this title is suitable for 14 years and over

Thor_Stongest_Avenger thinks this title is suitable for 11 years and over

ilovewhippets thinks this title is suitable for 14 years and over

madmax011 thinks this title is suitable for 9 years and over

Chinderixx thinks this title is suitable for 15 years and over

LINK TO SUMMARY FROM WIKIPEDIA:

36 quotes IMDb and surprised that this one is not in it as of today:

I'm an outlaw. ... What? I'm not kidding.
-Okay. Okay, outlaw, you can tell yourself that, but I might be the only person in the whole galaxy who knows what you really are.
Yeah. What's that?
-You are the good guy.