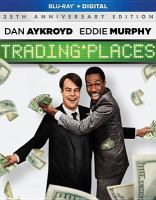 Next time you are approached by a pan-handler remember this movie. Ask yourself if you suddenly found yourself in that person's place "Could I do better? could this unfortunate person handle my job? maybe even do it better?" Never judge a person until you've walked a mile in her or his shoes.

Still brings out the laughter; great cast, with exception of that dud Aykroyd - why did anyone ever think he was funny?

Absolutely one of the funniest comedies from the 80's. Great supporting cast; Murphy and Ayckroid are at their best. Not to mention Jamie Lee Curtis!

One Dollar. That is the price of the bet - that will eventually lead to the hilarity inducing ups and downs of two innocent bystanders (played by Eddie Murphy and Dan Akyrod) in this 80s comedy. This movie is infinitely re-watchable and it's great to see a pre-9/11 NY in all its grimy glory.

Most rewatchable comedy of the 80’s. So many amazing performances and layers of comedy. There are incredible cameos with memorable moments (Frank Oz, Bo Diddly, Al Franken, etc.) and lines that make me laugh every time.

very funny first time around, but found it not so much this time. Tastes change.

Now a classic! So funny and silly and still relevant. A gem!

If you were making a list of the funniest movies of the 80's, Trading Places would have to be in the top 5. It comes in just behind Coming to America as far as 'funniest Eddie Murphy movies' in my opinion. I've probably seen Trading Places 50 times in my life, and even after more than 30 years the humor holds up. It's an American comedy classic.

A solid comedy from the 1980's, with Eddie Murphy and Dan Aykroyd on top of their comedic game, it has a solid script, director, and acting from everyone involved. The film does feature some site gags, but most of the comedy comes from snarky humor and wit, which I personally prefer to slapstick. It holds up well as a good example of the era it was filmed in. This is a movie for adults, and if you're looking for something beyond the usual Christmas standard fare, this is a good movie to turn to.

Sexual Content: One character is a prostitute. Female nudity is exhibited, but not any sexual acts. Innuendo is also used throughout.

Coarse Language: Cussing throughout the film can be expected.

Other: Some jokes may be considered racist against African Americans; personal judgment may need to be used.

"It wants to be funny, but it also wants to tell us something about human nature and there are whole stretches when we forget it's a comedy and get involved in the story." Movie critic Roger Ebert, June 9, 1983

Racist line that favors blacks/African-Americans--One of the Dukes (Randolph [Ralph Bellamy], I think), commenting on the singing in the tub by Valentine (Eddie Murphy): "They're very musical people, aren't they?"

britprincess1 thinks this title is suitable for 16 years and over