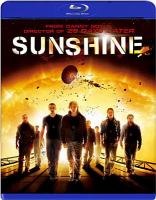 Might check it out...one of the best (Brosnan) Bond girls in it

I like more science in my sci-fi. Sunshine has some gore and violence and is edited with quick cuts like a horror movie. It has a soundtrack to match with labored breathing and screams. So although some of the solar visuals are beautiful, not my cup of "Tea, Earl Grey, Hot."

Just when you thought restarting the Sun couldn't get any harder...
I love the combination of pseudo-space-science procedural and slasher in Sunshine. For someone with a short attention span, it really keeps me engaged. The performances are great as well and capture what I assume it's like to be trapped in a tube with eight people for two years. And the soundtrack by Underworld and John Murphy really ratchets up the tension of flying a bomb the size of Manhattan into the Sun.

This is not a blu-Ray disc. Otherwise I would be unable to watch it.

Well worth watching. Some editing could have made things much clearer, like the shape of the ship and where the solar shielding is. Overall still very well done. Though the villain is a bit hard to explain or swallow at the very end.

Be sure to check out the Audio Commentary with Brian Cox. Arguably this is as interesting as the movie itself.

The trailer for this movie set the bar way too high and I was way too let down :(

When our sun starts to die, disaster and death are not far behind. After a failed mission to reignite the sun, a new crew of brave scientists and engineers undertake a years-long journey and become Earth's last hope of salvation. This is one of my favorite disaster/sci-fi movies of all time! It's directed by Danny Boyle (of 28 Days Later Fame), and features stellar performances by Cillian Murphy, Michelle Yeoh, Chris Evans, and more. It's one of those movies where I glean something new every time I watch it--from character motivations to hints at the ending that I missed the first or second time around.

Six years before "Gravity" blew out the box office (earning 7 times it's enormous production costs), garnering 7 Oscars from a roster of 10 nominations (!), Sunshine was released in a limited way in the U.S. and around the world to next-to-no hype/promotion and little acclaim and, not surprisingly, is considered a box-office failure.

I remember my reaction to Gravity when I walked out of the theatre (yeah, biggest of big-screen experiences) after seeing George Clooney and Sandra Bullock pinwheel around in space: "Ehhhh."

I just watched this "unknown" trouble-in-deep-space drama, and after the end credits, my reaction: WHEW!!

Sunshine, not some hyped-up space fantasy populated by "movie stars."--Is the real deal, people. (Yeah, but, well..."Oh, George is in space...gotta see Mr. Cool! Sandra too!! Loved her in "The Blind Side"...) If that's all that matters, well...

Other things matter. You get them all here. Terrific visual effects. Stellar performances by young next-to-unknowns including Cillian Murphy (Peaky Blinders), Rose Byre (28 Days Later), Chris Evans.(Capt. America) and Cliff Curtis (Fear of the Walking Dead). They and other young, unknown (therefore believable) members of the space crew are on a save-mankind mission to ratchet up the sun's temperatures to leaf-budding levels on an increasingly frigid earth. The stakes are the highest imaginable. What were the stakes in Gravity? Anybody remember? Oh, yeah, dangers to and on-board a space station within sight of earth. Ho-hum. No comparison.

Thank scriptwriter Alex Garland who gave us Ex Machina--borrow that one immediately--and, this year's Annihilation. That's big-time class. So's the director, here: Danny Boyle. Remember Trainspotting? The early zombie thrillers, 28 Days Later and 28 Weeks later? How about Slumdog Millionaire? He was behind the camera for all of them, too.

So: great script--with the exception of one little bitty problem early on--great direction, great young cast, and more twists and turns than Clooney or Bullock went through at the end of their tethers. See this one.

What! Killed Michelle? WTF! I'm not watching it! She's the only reason I found it; searching Michelle. Goodbye!

btmslt thinks this title is suitable for 18 years and over

Loading...
APL owns a similar edition of this title.