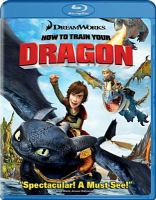 How to Train your Dragon

Hiccup is a Viking teenager who aspires to hunt dragons, but doesn't exactly fit in with his tribe's longstanding tradition of heroic dragon slayers. His world gets turned upside down when he encounters a dragon that challenges him and his fellow Vikings to see the world from an entirely different point of view.
Publisher: [United States] :, DreamWorks Animation,, [2010]
Edition: Blu-ray.
ISBN: 9781415755532
1415755531

5/5 Stars This movie following two ride-or-die companions is heartwarming and sweet. The protagonist is a boy named Hiccup who, despite being the Chief’s son, can’t seem to get anything right, and in a culture where slaying dragons is everything, strives to prove himself. As it turns out, he can’t get dragon-slaying right, either, and the dragon he brought down becomes his begrudging ally and later, an unlikely friend whom Hiccup learns from every day as he navigates his double-life. Hilarity ensues and I was at the edge of my seat waiting for them to uncover his secret. No matter how many times I see this movie, it never gets old, and the sarcastic humour of our unlikely hero has me laughing every time.
@Robin of the Hamilton Public Library's Teen Review Board

How to Train Your Dragon is such a great movie! The characters are likeable, the story line is unique, and the entire film is very entertaining. You will fall in love with each character and dragon, who all have their own unique personalities. I commend this creativity and originality of this film, and thought that the entire concept was very clever and engaging. I like the incorporation of Vikings and dragons, which made this movie very intriguing. I would definitely recommend this film to other viewers, as it has humour, adventure, emotion, and action! There is nothing bad I can say about this film! It is a must-see! 5/5
@PenelopeScriptor of the Hamilton Public Library's Teen Review Board

How To Train Your Dragon is the 1st movie in the How To Train Your Dragon series. This is the iconic movie that everybody has watched. I personally thought the movie was amazing. My whole family absolutely loves it. This movie is based off a young Viking teenager named Hiccup aspires to follow his tribe's tradition of becoming a dragon slayer. After finally capturing his first dragon, and with his chance at last of gaining the tribe's acceptance, he finds that he no longer wants to kill the dragon and instead befriends it. My favourite part would be the first time Hiccup and Toothless became friends. I would recommend this movie to people of all ages because it is family friendly. Must watch! 5/5.
@TheBookWorm of the Hamilton Public Library's Teen Review Board

How to Train Your Dragon is a 3D computer animated action fantasy adventure film produced by DreamWorks Animation in 2010. While the animation is high quality and notable for its time, there are far more satisfying pleasures garnered from this movie. Primarily, it is a traditional kid and his dog love story, except the dog is replaced with a dragon. The development of the relationship between Hiccup and his dragon Toothless is charming and makes you invested in both of their success throughout the film. Both characters have defined traits; weaknesses and strengths that endear us to them. The film is also a coming of age movie for Hiccup, as he tries to fit his pacifist world views into the barbaric culture of his upbringing. The aspect of the film I find most compelling is the world it is has created, and the lore behind the dragons. I have always been fascinated with magical creatures and this movie presents a wide array of them, each with a seemingly unexplored backstory, providing much potential for a sequel (which have been capitalized on) or other media. A fun family film, definitely don't pass it up. 3/5 Stars.
@Joaquin of the Hamilton Public Library's Teen Review Board

I very much enjoyed this movie! It was fun to watch a cute movie like this, especially one that showcases dragons. Hiccup is so admirable for befriending Toothless, and Toothless has got to be the cutest animated dragon I have EVER seen. After Astrid quit being a jerk, I enjoyed her character too. The only issues I had with it were how annoying the twins are and how I felt like it ended up being slightly anticlimactic. Although that's probably just the epic fantasy nerd in me speaking. I highly recommend this movie to all ages!

How to Train Your Dragon is a 2010 American computer-animated action fantasy film. The movie is loosely based on the 2003 book of the same name written by British author Cressida Cowell and was produced by DreamWorks Animation. It stars the voices Jay Baruchel, Gerard Butler, Craig Ferguson, Jonah Hill, and T.J. Miller. The movie takes place in a mythical Viking world where viking teenager Hiccup dreams to follow his tribes tradition of becoming a dragon slayer. Finally, after capturing his first dragon, he sees his chance at finally gaining his tribes acceptance. However, he befriends the dragon and discovers he no longer wants to kill it. The film received tons of commercial success. It earned nearly $500 million worldwide and was nominated for an Academy Award for Best Animated Feature. I would give this movie a 10/10, Hiccup is not only a great character in the movie, but he is also a good role model for children with the message he sends in the movie. He could have easily just killed the dragon and gained his tribe’s acceptance, but instead he got to know the dragon and took the noble route. This is a great message towards kids to do the right thing even when it isn’t the popular or “cool” thing to do.

meh. that's all i have to say

My mother and my sister loved this movie!

This movie was so good that it made me want to read the book series (and I'm a 20-something-adult!). The relationship between Hiccup and Toothless is real, the animation is beautiful, and the story entrancing. I appreciated the fact that they didn't Disney-fy the ending, even though some viewers could find it upsetting.

While the first movie was AMAZING, (and ten times the story found in the first book), the written series does a better job of keeping the characters at an age that is relatable for the audience the story was originally geared towards (though this child trapped in an adult's body does enjoy watching Hiccup and Astrid grow up). The written series (as well as the first movie) also has better villains and a more cohesive story arch.

Man, Dreamworks is a total mixed bag. On one hand, they can put out some pretty lackluster, derivitive movies that noone wants to watch. On the other hand, they produce gems like How To Train Your Dragon that make you seriously compare them to Disney as competition.

most epic movie of all I've seen. And great book but a little dreary.

i love the difference in animation quality between the first and second movies!!!

HICCUP: (to toothless) Thank you for nothing you useless reptile!

HICCUP: (to toothless) I'm gonna kill you dragon, I'm going to cut out your heart and bring it to my father.

"and" pretty much everyone says 'and' in the movie.

You love mythical creatures? You will like this movie:-)

"Chances of survival are dwindling into the single digits."
-Fishlegs, while in dragon training

Hiccup: "It's not the Dragon I'm Worried about."

Astrid: "Hiccup, we just found the Dragon's Nest. And you Want to keep it a secret? To Protect your Pet Dragon?"

black_mouse_61 thinks this title is suitable for 9 years and over

violet_bird_2483 thinks this title is suitable for All Ages

violet_bird_2483 thinks this title is suitable for All Ages

Lover_of_Hockey4ever thinks this title is suitable for All Ages

Aven_reads thinks this title is suitable for 5 years and over

Bakergirl_13 thinks this title is suitable for 6 years and over

red_dog_4279 thinks this title is suitable for All Ages

indigo_butterfly_541 thinks this title is suitable for All Ages

Sexual Content: Correction, there is NOOOO sex. This is pg. There's a kiss and a crush, but it's VERY clean.

Violence: There are some action scenes where it may frighten younger audiences but not too many.

Violence: There are some scary parts but not many.

A hapless young Viking who aspires to hunt dragons becomes the unlikely friend of a young dragon himself, and learns there may be more to the creatures than he assumed.

Hiccup a young viking who is less than viking-like wants to fit in with the village so he sets out to hunt and capture the deadliest dragon known to man.

He later realizes that it's his difference that make him special and great.

Also, the dragons behave like cats. This resulted in feelings of disappointment toward my tiny, wingless cat. I know it's not her fault but it would be great if she just started flying or something.