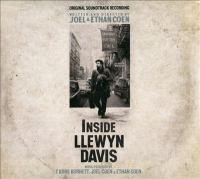 This film & soundtrack helped me discover classic folk artists I now adore. For me, the only drawback on the album is Justin Timberlake, but he is only featured in a couple songs. His pop-style voice just doesn't really fit with the mid-century folk sound.

Believe me, I am very impressed with the selection of recordings of this folk collection. These are recording artists that are authentic folk performers. They are not in it for money. Folk performers love their music and it shows on these songs.
P.S. The Cornell Brothers (Folk Music) will perform next on Thursday, May 9, 2019 at 7 PM at the KCLS Woodmont Library. The show is free! All ages encouraged!

I enjoyed this soundtrack a lot. The film was a semi-celebration of the singer/song writer folk era and the soundtrack brought new covers and songs that are great to listen to while the leaves turn colors. Enjoy!

A couple of good ones on this CD. The movie was quite good too!

There are some good period tunes here, but not well done, perhaps the Dave Van Ronk cover of Green Green Rocky Road.

There's something deliciously perverse in hearing Justin Timberlake sing – gorgeously, it must be said – old-timey roots music. He's a minor character in the Coen brothers' rich Sixties-folk-revival tale, and also on this handsomely lean soundtrack, sung mostly by the fi lm's cast. His colleagues do fine, notably star Oscar Isaac (see the sweetly grim English ballad "The Death of Queen Jane") and Girls guy Adam Driver (singing bass "uh-oh!"s on the fauxperiod novelty "Please Mr. Kennedy"). But off screen, only the group harmonies – "Five Hundred Miles," with Timberlake and co-star Carey Mulligan; "The Auld Triangle," with Marcus Mumford and Timberlake – head toward the sort of spine-tingling that defined the soundtrack to the Coens' O Brother, Where Art Thou? That LP's producer, T Bone Burnett, is on board here, and the Punch Brothers add low-key accompaniment. But none of the actors have the vocal character of the late Dave Van Ronk, whose biography inspired the film and whose bluesy "Green, Green Rocky Road" caps this set, or of another folk singer – the young Bob Dylan – whose rarity "Farewell" signals a new era dawning in the film and on this collection. Now, as then, he's the yardstick.