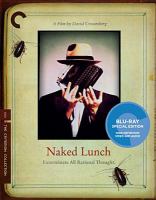 Naked Lunch is chronic movie-time constipation at its most anally painful.

It's when you stop to consider that one of the main characters in Naked Lunch is, in fact, a "talking" sphincter (it's true), that the situation gets unintentionally comical. It's especially when this babbling butt-hole and Bill (Peter Weller) are engaged in one of their many screwy conversations that this film loses its grip on reality.

I mean, what in the hell are you supposed to say to a sphincter? Go ahead! Try talking to your own sometime and see what kind of a response you inevitably get from it.

And, of course, of all the lopsided-minds in this world, it took the most whacked-out one of them all (director, David Cronenberg) to bring Naked Lunch to the big screen.

Any idiot with half a brain in his head could have told this nut (which I'm sure they did) that the William Burroughs' novel of the same name was impossible to film.

Right from the start Naked Lunch is absolutely nonsensical to the nth degree, which makes it right on par with the Burroughs' novel.

The story runs off in so many different tangents, seemingly all at once, that it will make your poor, little head spin-spin-spin. I'd confidently say that you'd probably have more luck getting a clear story just talking to your own sphincter, rather than try to piece together Naked Lunch's rectal-mess.

Bravo, Cronenberg! You can have your Naked Lunch, and eat it, too!